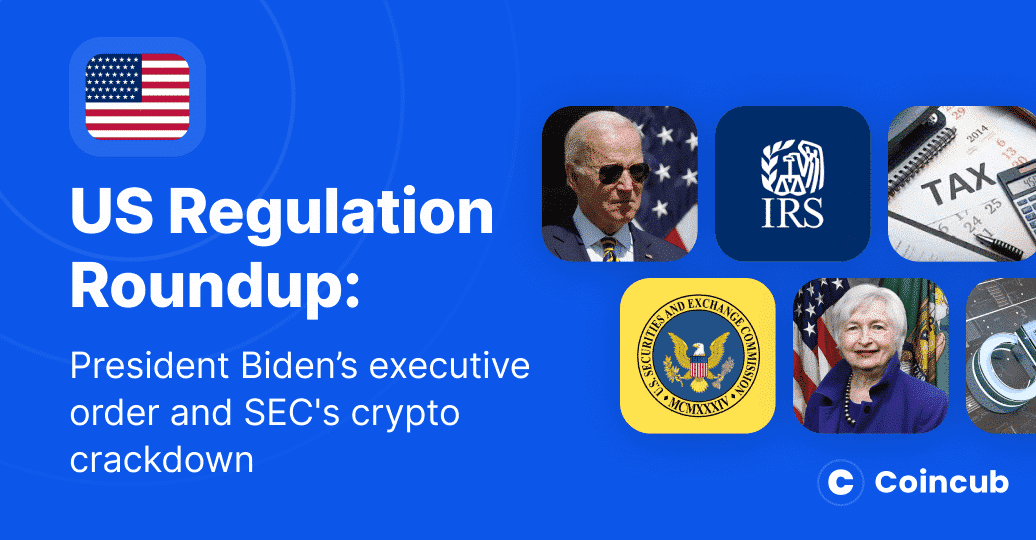 It’s been a weird, wild, and wonderful month for the US crypto ecosystem. Pundits thought that Biden’s executive order on crypto development would be the meatiest development to chew on, but were bowled over by the SEC’s promised crackdown on crypto law, not to mention US Treasury Secretary Janet Yellen’s push for stablecoin regulation. Yellen’s move isn’t surprising considering the upheaval in the stablecoin community caused by terra’s astonishing fall from grace.

Crypto is a pressing issue for US lawmakers to address. Up to now, cryptocurrency has occupied a queasy space between the poles of fully-regulated commodity and lawless internet crime money. There have been four major developments in US crypto policy in the last month: President Biden’s executive order, the bipartisan infrastructure bill, the SEC’s renewed commitment to bringing crypto in line with other securities regulations, and Janet Yellen’s push for stablecoin regulation. It looks as though the Biden administration is committed to integrating cryptocurrency fully – at least, as fully as they need to ensure that no coin goes untaxed.

The executive order encourages comprehensive, interdepartmental action on the crypto question. The focus on increasing U.S. competitiveness on a global stage is promising, as it signals a willingness to work with innovators, albeit in a “responsible” manner per directive 6. The President’s stated interest in interdepartmental coordination to enforce crypto regulation anticipated remarks by Treasury Secretary Yellen and the SEC. There was a brief mention of the environmental impacts of cryptocurrency that may be elaborated on in the future, likely as a point of government intervention.

The most startling development from the directive is the Biden administration’s stated interest in developing a potential US central bank digital currency (CBDC), or a digital dollar. This comes in the wake of China’s pioneering CBDC, the e-CNY introduced in February of 2022. CBDCs are a type of government-backed digital currency usually pegged to the value of the country’s fiat currencies. CBDCs are typically regulated by a central authority, often a bank. Nigeria has already launched the e-Naira, while Russia and China are both piloting CBDCs of their own.

The Fed released a study in January on the ramifications of a US CBDC but has not issued guidance either way. A functional CBDC, according to Yellen, would “likely present a major design and engineering challenge that would require years of development, not months.” The conversation about a US CBDC is well underway, but unlikely to be resolved for a while yet.

The SEC cracks down

The SEC chair, Gary Gensler, has ramped up his vocal criticism of digital asset exchanges. In an interview with Bloomberg, Gensler accused some exchanges of shirking rules and betting against their own customers. One of the most debated questions surrounding crypto is whether it is an asset or a security. The SEC regulates securities, while the CFTC manages regulation of the crypto market itself – a situation that has led to confusion. Additional confusion is raised over the fact that by former SEC chair Jay Clayton’s definition, bitcoin is not a security, but any token backed by an ICO is.

The SEC also nearly doubled the size of the unit responsible for enforcing crypto asset regulation and renamed it to boot. The unit formerly known as the Cyber Unit now goes by the Crypto Assets and Cyber Unit – a clear signal to anyone trying to dodge the long arm of the law.

Yellen takes a stance on stablecoins

During her annual testimony in front of the Senate Banking Committee, Treasury Secretary Janet Yellen pushed for stablecoin regulation at a federal level. This comes amid terra’s stablecoin UST becoming unpegged from the dollar with a resultant loss of $42 billion from UST and luna. terra’s unpegging from the US dollar came as a grim reminder to US lawmakers and regulators, Yellen included, about the concerning instability of stablecoins nominally pegged to the US dollar.

Yellen’s remarks in front of the Senate Banking Committee follow on from those made at an address to the American University in April, where she briefly mentioned the policy concerns raised by stablecoins – particularly their inconsistent and fragmented oversight. Yellen also referenced the catastrophic run that destabilized Iron Titanium (TITAN) token in June 2021, foreshadowing the terra chaos that would erupt a month later. Stablecoins are a hot-button issue for this administration, with committees in both the House and the Senate holding hearings on stablecoins, particularly ones where the reserves backing the tokens were of questionable quality.

Recent policy proposals include Representative Trey Hollingsworth (R-IN), who put forward a bill in March that would require stablecoin issuers to hold reserves in government securities, fully collateralized repurchase agreements, and U.S. dollars or other non-digital currencies. Senator Bill Hagerty (R-TN) introduced a Senate version of the same bill in May.

Further crypto regulation is being pursued in an effort to prevent the bypassing of sanctions targeting Russia in the wake of its invasion of Ukraine. Bills co-sponsored by Congressman Brad Sherman (D-CA) and Congressman Al Green (D-TX) would prohibit crypto exchanges subject to US law from providing services in Russia, and sanction other exchanges that facilitated transactions with Russian-based wallet addresses. Furthermore, the legislation would require US taxpayers to report crypto transactions over $10,000 with foreign accounts to report to FinCEN.

Amid the push for increased legislation and oversight, the new $1.2 trillion bipartisan infrastructure bill may be the final nail in the coffin for crypto’s anarchic reputation. Despite concerted lobbying from the crypto industry, crypto brokers of all stripes, including cryptocurrency exchanges, are now required to issue a 1099-B, notifying the IRS directly of all crypto transactions. Bipartisan efforts were made in both the House and the Senate to amend the bill, but were not successful. All of these developments suggest that the US is finally gearing up to create comprehensive cryptocurrency legislation.

Why is everyone losing their minds over stablecoins?

Stablecoins are a type of cryptocurrency that tries to maintain a stable value, often one that is “pegged” to a type of fiat currency. There are multiple types of stablecoins – some are backed by assets, while others use algorithms to ensure that their value remains constant. terra, or terraUSD (UST), is a type of algorithmic stablecoin that uses an arrangement where two tokens are used to balance each other out. UST is the stable “peg” token, and LUNA is a balancer token with fluctuating value.

It was a system that relied on high investments of time and attention from savvy arbitrageurs, and, according to University of Calgary professor Ryan Clements, an “inherently fragile” system that was built to fail. For UST to remain truly stable, it would require infinite demand, perfect and fully rational economic actors, and constant reliable price information – none of which can be controlled. Demand for terra was wildly increased based on a staking scheme called Anchor, which promised those who bought and staked UST 20% annual rewards.
When UST depegged from the dollar, investors made a run on their remaining assets, flooding the market and crashing LUNA. terra creator Do Kwon sold off $3 billion in bitcoin in a last-ditch attempt to maintain the peg, tanking the market. UST, LUNA, and bitcoin weren’t the only losers – several other stablecoins pegged to the dollar have also struggled to maintain value.