Skip to content
A shift is underway in the global distribution of crypto nodes Views:
Table of contents
'' '' ''

A shift is underway in the global distribution of crypto nodes

A shift is underway in the global distribution of crypto nodes 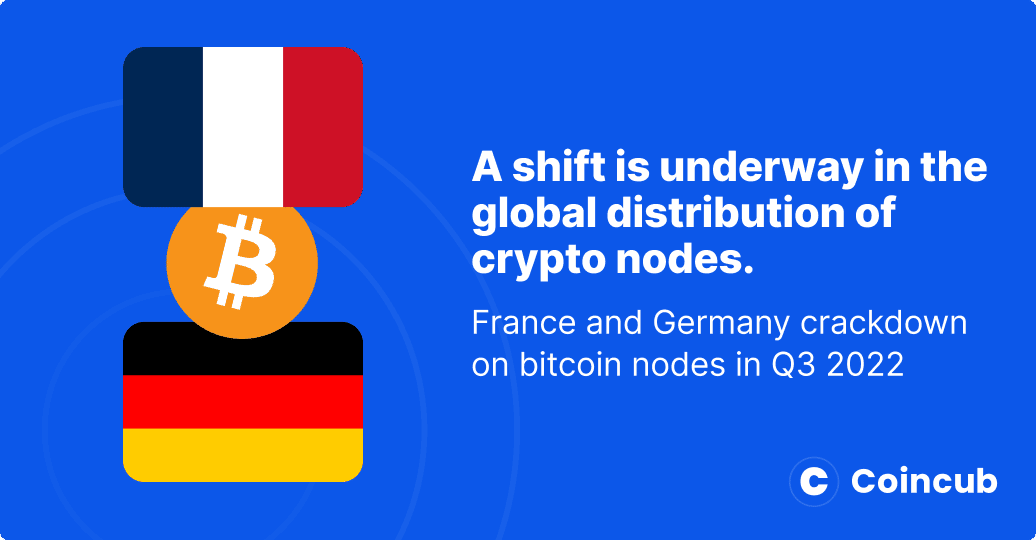 1. France and Germany crackdown on bitcoin nodes in Q3 2022

The health of most blockchains relies on the diversity and number of their nodes. Fewer nodes mean that a network is easier to overrun and take control of. Geographically concentrated nodes mean that governmental bodies can assert control over a blockchain, such as in the case of the SEC vs. Ian Balina.

The global distribution of Bitcoin nodes continues to change in Q3 2022. France and Germany both lost over 100 nodes. In Germany, cloud provider Hetzner banned all blockchain node activity. In August, Cointelegraph reported that Hetzner’s cloud services hosted nearly 16% of Ethereum nodes. In their terms and conditions, Hetzner states that “the operation of applications for mining cryptocurrencies remains prohibited. These include, but are not limited to, mining, farming, and plotting of cryptocurrencies.”

Reddit users in the r/hetzner subreddit commented on the recent crackdowns, particularly perceived inconsistency in enforcing the crypto ban. According to bitnodes.io, Hetzner is still the second most common network for hosting Bitcoin nodes, supporting nearly 6%.

Disproportionate numbers of nodes in a country reflect on many factors. Cost of energy, legality, community presence, and access to cheap hardware all influence the number of blockchain nodes a country hosts. Germany has been a hub for Ethereum thanks to Berlin’s dev community. A commitment to autonomy and antipathy for surveillance also helped Berlin develop a thriving community around Bitcoin. Favorable tax rates further incentivize miners to invest in supporting nodes.

Rising energy costs across the board have made altruistic nodes less appealing to everyone. This could contribute to rising centralization, as only entities with the existing capital to invest in electricity and the number of rigs to make things worthwhile.

2. Who is running nodes and why is this important?

Wherever cheap servers exist, so do nodes. The location of the physical node and the location of the node owner aren’t always linked. Nodes usually live on rented servers in data centers, which can be anywhere in the world. While some hobbyists are running nodes from their personal computers, most people prefer cheap rented servers.

Crypto node numbers and location signify where energy and bandwidth are cheap. While node locations do not reflect owner locations, overall node numbers may reflect how friendly a jurisdiction is to cryptocurrency.

Overall node numbers indicate the health of a blockchain. If a project has low nodes, it likely has little actual interest from the public.

Over the past 7 years, the number of Bitcoin nodes has increased at a steady pace, although there have been drops in number. There are many potential reasons for fewer Bitcoin nodes: power outages, energy prices, hosting provider policy changes, and general cataclysm. It’s also difficult to get a truly accurate idea of the number of nodes. Bitnodes provides a useful general overview of the state of Bitcoin nodes, but still misses many due to the way their surveying software works.

3. Nodes vs. the state – the upcoming control battle

Cointelegraph reported on a case where the SEC brought charges against YouTubers Ian Balina for conducting an unregistered token offering in 2018. According to the SEC, the Ether contributions to the pool were validated by the Ethereum blockchain, “which are clustered more densely in the United States than in any other country.”

The SEC isn’t wrong about the location of the nodes: according to ethernodes.org, 43.7% of all Ether nodes are located in the US – more than 3.5x that of their closest competitor, Germany. They concluded that “as a result, those transactions took place in the United States.”

The SEC’s announcement that all Ether transactions take place in the US sent ripples through the crypto community. Ethereum, like many other cryptocurrencies, derives much of its appeal from the concept of borderless cooperation between self-determining individuals. Even though crypto is increasingly the realm of hedge funds, states, and industrial banks, it is still an ownerless technology.

If the SEC decided to sanction Ethereum tomorrow, the system wouldn’t stop working. Instead, it would take a temporary hit as users migrate nodes to more favorable regions.

4. How do crypto nodes work?

What exactly is a crypto node? We’ll take a quick look at what crypto nodes are using the big 2 as case studies. Bitcoin is a proof of work (PoW) coin, while Ethereum is now happily proof of stake (PoS). For more on ETH’s transition from PoW to PoS, check out our article on the Merge here.

Simply put, each node is a computer participating in a blockchain. Every blockchain interacts with nodes in a unique way, but almost all blockchains make use of nodes. In most blockchains, nodes hold identical copies of the transaction ledger. When a new group of transactions is added to the ledger, all participating nodes must update their copies so they can validate future transactions.

In most blockchains, nodes are run by volunteers. Many blockchains find ways to incentivize nodes to keep them honest.

5. What are bitcoin nodes?

The Bitcoin blockchain is the blueprint, the distributed ledger that inspired countless imitators. It relies entirely on the collected action of nodes and miners to maintain the network.

Bitcoin nodes are computers that are connected to the Bitcoin network and run the official Bitcoin software to validate, broadcast, process, and store Bitcoin transactions.

There are many types of Bitcoin nodes, but we’re only going to mention three: full nodes, miners, and light nodes.

7. Who are the bitcoin miners?

Also called mining nodes, miners pick transactions from the pool of validated transactions, and then package them into blocks. Miners compete against each other to create the next block. Once miners think they have completed a valid block, they broadcast them to full nodes, who then verify the validity of the block. If a full node rules the block valid, it is added to its copy of the blockchain and broadcast to other nodes, who also verify it.

Consensus is reached when enough full nodes validate the block and add it to their ledger. The miner who created the block gets a reward in the form of bitcoin, the transactions in the block are processed, and all nodes store an updated copy of the blockchain so they can continue the process.

According to Michael Saylor, #Bitcoin miners are a globally decentralized network.

8. What are light nodes?

Light nodes run a lightweight version of the Bitcoin software that allows them to connect and transact on the /bitcoin network without storing the full blockchain. Light nodes can’t independently verify transactions and must connect to full nodes to get block data. Bitcoin wallets are a common type of light node.

9. What are Ethereum nodes

It’s possible to run an Ethereum node in multiple ways. Node operators can run the client software that downloads a copy of the Ethereum blockchain in order to verify the validity of each block. Ethereum nodes are designed to run on average consumer-grade computers, and users can opt to run nodes either continuously or only when they are online.