Skip to content
Stablecoin hell and how to survive the next crypto winter Views:
Table of contents
'' '' ''

Stablecoin hell and how to survive the next crypto winter

Stablecoin hell and how to survive the next crypto winter 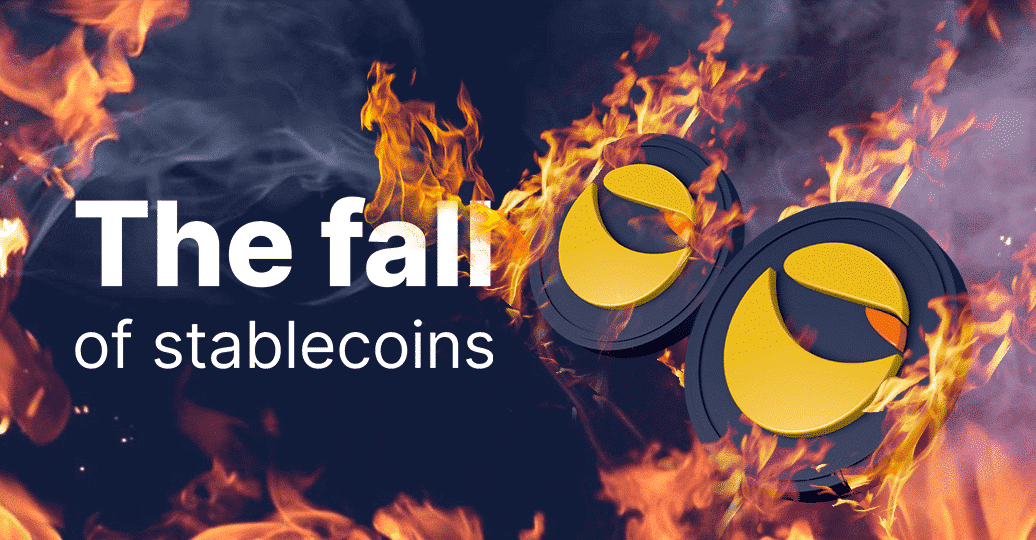 Over the course of a week in early May, several things happened in quick succession: the algorithmic stablecoin UST, supposedly fixed at one USD, depegged from the dollar. It fell first to 98.5 cents, then to 35 cents, then to 10 cents. Its companion token, LUNA, goes from $80 to $0.000145. The Terra blockchain is halted, and reports start pouring in about investors who have lost their life savings. Bitcoin loses 17% of its value; Ether loses 26%. Neither have recovered. Terra founder Do Kwon takes to twitter to apologize for the approximately $42 billion that has effectively vanished into thin air.

The remarkable failure of Do Kwon’s algorithmic stablecoin has triggered market-wide effects. Even the giants of the crypto industry have taken a hit: Coinbase lost half its money, with founder Brian Armstrong personally down $11 billion. Binance CEO Changpeng Zhao was also hit by the Terra collapse, tweeting that he’s “poor again.” It’s hard to feel too bad for Armstrong or Zhao, considering that both are still multi-billionaires while so many other Luna investors have lost everything. All in all, the crypto market has seen better days. Goldman Sachs calculates $1 trillion in value lost in the crypto market in 2022. 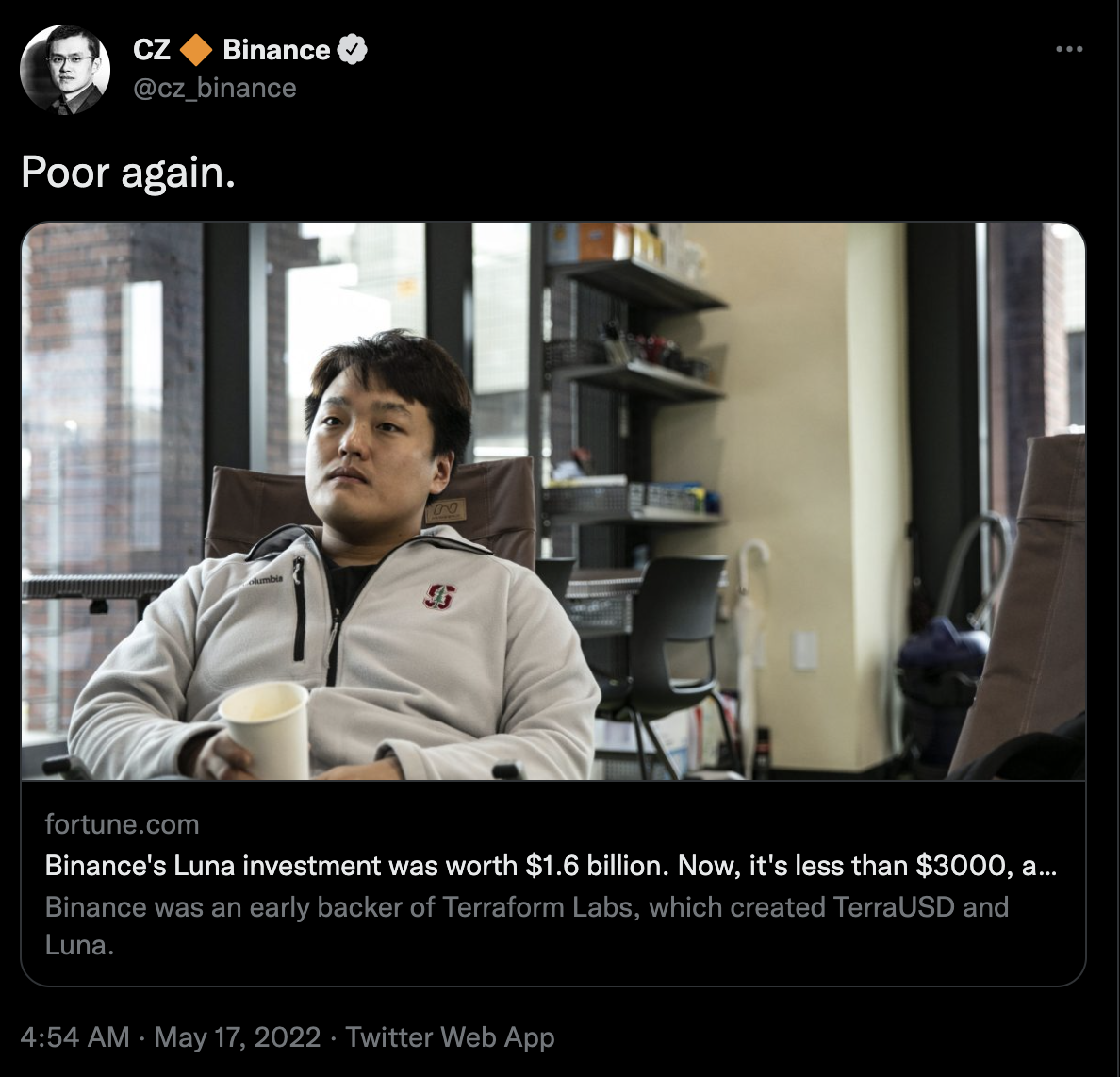 Are we all having a terrible time?

Some argue that the current crypto recession isn’t unique. It’s hard to deny the chilling effect amid the general climate of recession, war, and anxiety. The Guardian reports that Tether redemptions might cause wider problems in credit markets, or due to the risk of wider asset sell-off by retail investors grappling with heavy losses.

Naysayers are taking the opportunity to reaffirm their antipathy towards crypto. In an interview aired on Dutch television, European Central Bank (ECB) president Christine Lagarde said that crypto is “worth nothing. It is based on nothing, there is no underlying assets to act as an anchor of safety.” In the same interview she argued for a digital euro, saying that it would be guaranteed by a central bank.

The Terra collapse has also caused finance ministers from the G7 to release a statement urging the Financial Stability Board (FSSB) to “to advance the swift development and implementation of consistent and comprehensive regulation of crypto-asset issuers and service providers, with a view to holding crypto-assets, including stablecoins, to the same standards as the rest of the financial system.

The fall of the algorithmic stablecoin or Stablecoin Hell

Tether (USDT) is the biggest stablecoin by market capitalization, as well as the most popular. The stablecoin is pegged to the US dollar, although there was a scare on May 12th when USDT briefly traded for less than $0.98. Conceptually, each USDT token is redeemable for one US dollar. While Terra maintained its value via an algorithm, USDT is supposedly backed 100% by its reserves. Those reserves, however, haven’t always been guaranteed.

For years, the Tether team claimed that each USDT token issued was backed one-to-one by US dollars. However, a 2019 affidavit revealed that this was a lie. Under the terms of a settlement with the New York Attorney General, Tether is now required to release statements detailing the contents of its reserves. The most recent statement was released in 2022, and show that cash and bank deposits make up only 4.9% of the overall reserves.

Tether refuses to release more details about its reserves. CTO Paolo Ardoino was quoted in the Financial Times saying that revealing too much detail about reserve management would be giving away the company’s “secret sauce.”  Anxious investors are making a run for USDT, withdrawing over $7 billion from the ecosystem in the week after the Terra collapse and Tether’s brief unpegging.

While investors have been yanking money out of Tether, their main rival Circle’s USD coin (USDC) has benefited. USDC is also pegged to the dollar, and Tether’s brief wobble on May 12th has converted investors to Circle’s stablecoin. Jeremy Allaire, Circle chief executive, recently announced that weekly reports of USDCs reserves would be published. Unlike Tether, Circle’s USDC reserves are backed by cash and short-dated U.S. Treasuries. 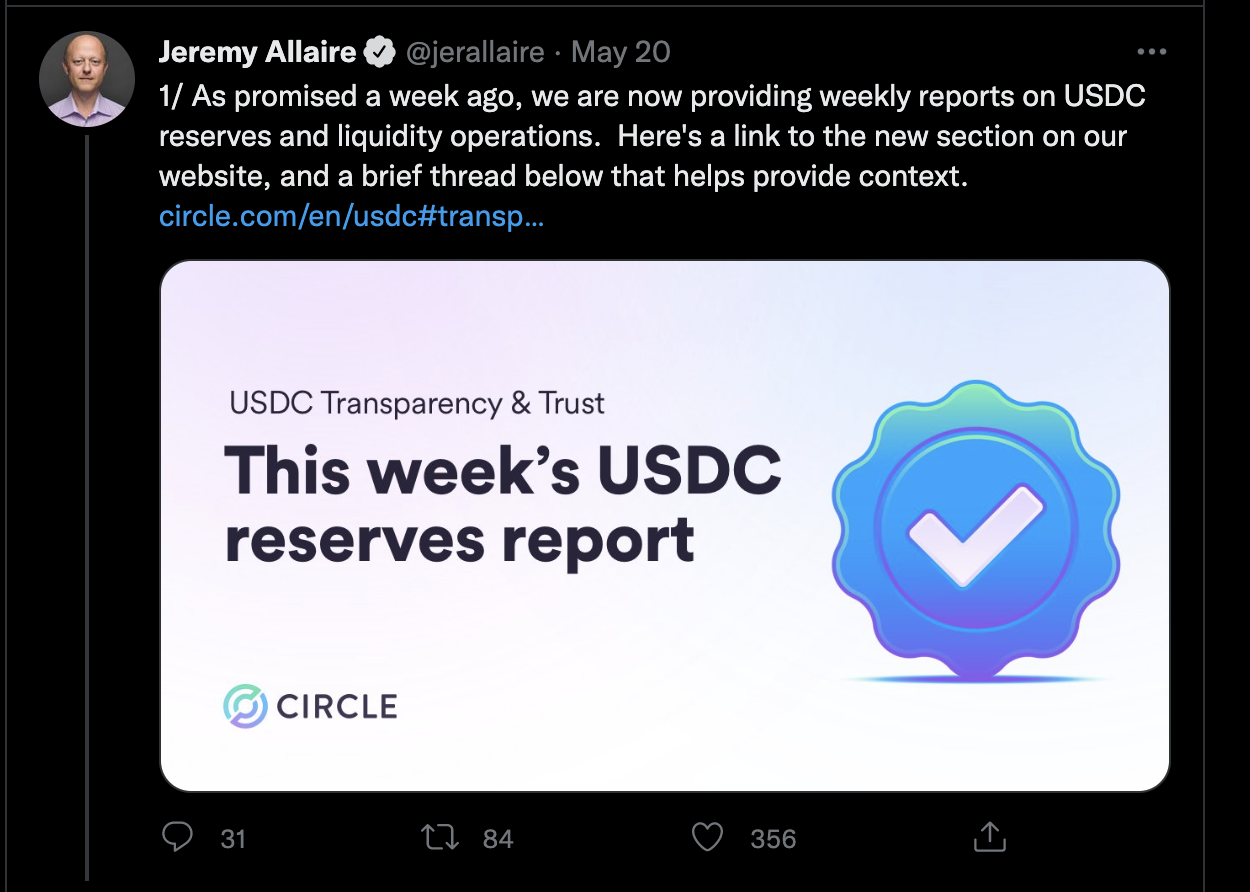 Another one bites the dust. DEI, an algorithmic stablecoin issued by Deus Finance, depegged from the dollar soon after the Terra collapse. At the time of writing, DEI still has not risen above $0.80, according to data from coinmarketcap. DEI is currently valued at $58 million, a drop in the pond compared to Terra’s high of $41 billion.

DEI is operated by Deus, a DeFi project based on the Fantom ecosystem. The DEI team is trying to regain the peg by creating a treasury bond program. It seems that normally DEI woud be redeemed with USDC from the treasury, but this was not possible as most of the USDC was stolen in a hack.

Did we mention that stablecoins are largely unregulated?

USDT, USDC, DEI, and DAI – no one’s winning any points in stablecoin land for distinct names. DAI, a decentralized stablecoin created by MakerDAO, dropped in value to $6.2 billion from $8.5 billion. DAI is an algorithmic stablecoin like UST, but it is also collateralized by a diverse array of crypto assets.

Binance USD (BUSD) is another stablecoin that profited from Tether’s losses. BUSD is another stablecoin pegged to the dollar issued by crypto exchange giant Binance in partnership with Paxos. After a brief tumble on May 12, BUSD’s market cap climbed to over 18.5 billion, reaching an all-time high in late May according to data from CoinMarketCap.

BUSD has another advantage over Tether. It is, according to Binance, fully backed by US dollars held in FDIC-insured banks. BUSD also provides monthly audited reports of their reserves, and is fully regulated by the New York State Department of Financial Services.

Decentralized finance (DeFi) has also taken a hit. It’s no coincidence that many are blaming the Anchor protocol, a DeFi app that allowed people to stake and borrow Luna. Anchor promised annual percentage yields of nearly 20% – an insanely high number. Critics referred to the Anchor protocol as a Ponzi scheme. However, as Elizabeth Lopatto notes in her article for the Verge, even Bernie Madoff wasn’t promising 20% interest rates.

Anchor created a demand for Terra, which led to investors piling in and depositing all of their money. It was the Achor protocol, however, that dragged investors to rock bottom. When Terra crashed, people couldn’t remove their money from Anchor. Anchor protocol went from being the DeFi sector’s third largest app to a cautionary tale.

Terra’s fall has also taken other DeFI projects with it.

Blizz and Venus lost investor holdings after accidentally accepting Terra using out-of-date valuation. Venus Protocol, an algorithmic money market, lost $11 million after incorrect Luna price information on the analysis platform Chainlink left the app open to an attack by opportunistic hackers. Blizz Finance, another DeFi app, fell prey to the same attack. Hackers were able to drain $8.3 million in assets, most of which belonged to the Blizz team. As a result, the protocol has shut down, with remaining funds distributed to users.

Public Opinion on the stablecoin downturn?

In the wake of these events, opinions have been divided. Critics are having a field day, with top officials at Davos taking the opportunity to savage cryptocurrencies. Elsewhere, articles are piling high as non-investors share their endless schadenfreude over the losses of others. Some writers are taking the chance to call out crypto as a collective delusion, Elsewhere, investors who lost money in the crash are railing against celebrities that endorsed crypto products.

Some people are getting inventive with their critiques of the Terra crash and the blind optimism that led up to it. USDTea, a new stablecoin designed by artist collective Mossy, recently launched to great success. It’s backing? One 23 oz can of AriZona Iced Tea, a beverage that has been priced at $0.99 cents since 1996.

Plenty of people still have hope for the future even in the middle of a frosty crypto winter. Crypto long haulers have had plenty of experience weathering bear markets. Crypto events are still going forward even if, as Jacqelyn Melinek notes, many are turning into impromptu job-fairs.

What is an algorithmic stablecoin?

Algorithmic stablecoins are a type of cryptocurrency that tries to maintain a stable value through the use of an algorithm or smart contract.

Currently, the top five stablecoins by market capitalization according to data from CoinMarketCap are: