Skip to content
How big is crypto fraud, really? Views:
Table of contents
'' '' ''

How big is crypto fraud, really? How big is crypto fraud, really? 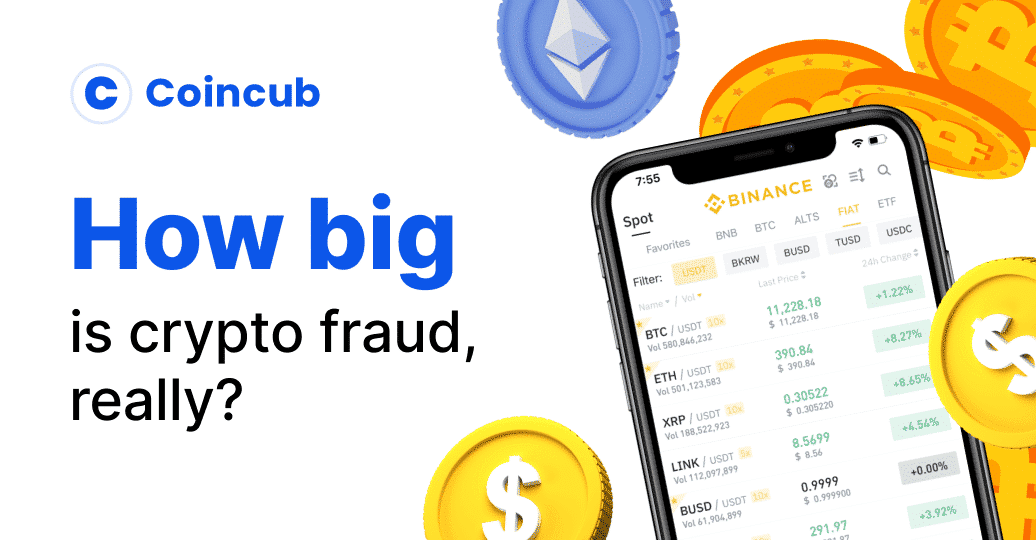 But how big is crypto crime now? Read more below

In fact, the CEO of Natwest recently spoke to Bloomberg about the rise in crypto investment scams, warning of a “‘Pandemic’ of Bank Fraud”, according to Bloomberg’s headline. Yes, you might say that surely a significant amount of this must be traditional bank fraud, using fiat currency, and you’d be correct.

SWIFT (Society for Worldwide Interbank Financial Telecommunication), the global payment network used by most banks, found that “cases of laundering through cryptocurrencies remain relatively small compared to the volumes of cash laundered through traditional methods”. However, this report was released in September 2020; In 2021, Chainalysis released a report stating that “illicit addresses receiving $14 billion over the course of the year”, around double the figure for 2020.

Below you can see a breakdown from the report, showing which forms of illicit activity were the biggest over the last few years

So which is it? While reports seem to contradict each other, there is evidence in all reports to suggest that this type of crime is rare in the crypto space. In 2021, only 0.15% and at its highest, only 3.37% in 2017, according to Chainalysis.

A spate of recent ransomware attacks on governments and educational institutions have sparked fear and scepticism, however, neither has explicitly stated that the attacks were related to cryptocurrency or the Blockchain. However, in two other cases, there have been proven links to cryptocurrency.

Most recently, five US states ordered a halt to NFT sales from a metaverse casino with alleged links to Russia and just a few days before, the US sanctioned Blender.io, a crypto mixer, for their role in a helping a North Korea sponsored hacking group launder $20.5 million in proceeds in one of the biggest ever crypto crimes of its type.

According to a 2018 report by the United Nations Office on Drugs and Crime (UNODC), the amount of laundered cash (fiat currency) in a year is around $800 billion. By comparison, another Chainalysis report says that the amount of crypto laundered over the last five years amounts to $33 billion, a mere 4.13% of that of similar activity in fiat currency. So, on the face of it, crypto crime is minuscule put up against fiat currency crime.

A visualisation of this can be found below 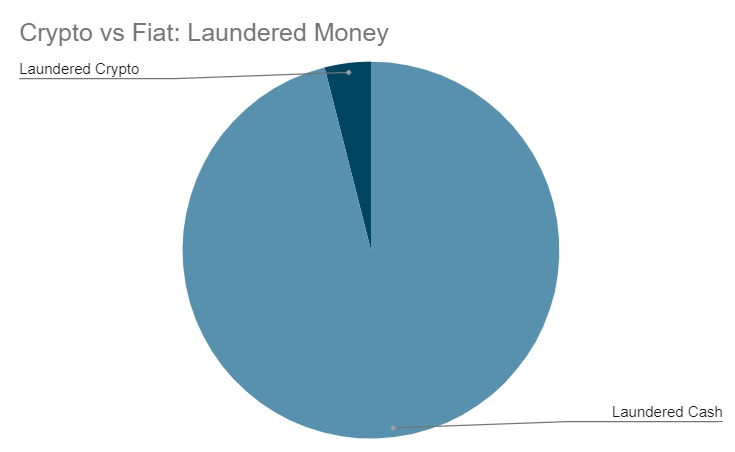 That isn’t to say that one day soon, it could overtake fiat currency based crime, however, considering that Chainalysis, in their 2021 Crypto Crime report, states that the amount of cryptocurrency transaction volume actually associated with crime represents 0.62% of all activity, the myth that crypto is inherently dangerous can be fairly safely dismissed.

While this is true, this does not mean that Crypto Crime is easy to spot or that it will necessarily appear as related to crypto in the first place. A surprising amount of attacks are actually hard to spot ransomware in which a payment may be demanded in crypto in order for the victim to regain access to their files or computer.

As shown by the examples above, this is not restricted to individuals, even hitting educational institutions and others in recent months. These sorts of attacks rose by 311% in 2021 and you can see why. Cryptocurrency and the Blockchain, by their very nature, have been hard to trace. Just because crypto crime is still a small percentage by comparison to crime with fiat currency, that does not mean, by any stretch, that it isn’t on a rapid increase.

Will it get worse?

So Crypto Crime is BIG and you are not rid of it, even if you don’t engage with the Blockchain space on a regular basis. With the introduction of Web3, a new protocol for publishing and browsing on the internet is introduced, and with its heavy reliance on the Blockchain, so Crypto Crime will become more of a concern.

Are we ready? Right now, the likely answer is no but there are still very few use cases for Web3 in everyday life, meaning that this isn’t likely something to worry about right now.

As the mass adoption of Web3 technology approaches in the future, whether a transition that many have to make or a choice to move towards a new protocol, Crypto Crime needs to be at the top of the agenda before we consider building a whole internet on the sort of technology which could, if left unchecked, leave us vulnerable to attack.

The rise in uptake of the Blockchain in many areas of life, from trading to music streaming, is already here. With this, along with the many types of ransomware, the risk of crypto crime is vastly increased and we need to be on the lookout. It’s easy to be fooled into thinking we are all experts and know what is and isn’t a scam but this isn’t necessarily the case.

Having said that, while there is an increased risk, crypto crime still represents a very small proportion of Blockchain activity, so that’s good news. Multiple reports by experts in the field, such as Chainalysis, back this claim up with figures that can put our minds at ease (for now).

Yes, Crypto Crime is big but not as big as crime relating to fiat currency. This would, however, make sense. After all, fiat currency, at least for the time being, is our main form of payment for the majority of transactions and the global economy.

However, if other countries follow the lead of El Salvador, which adopted Bitcoin as their legal tender in 2021, who knows how big crypto crime could get. If mass adoption of cryptocurrency as legal tender were to happen without significant regulation, this could spell disaster for unchecked crypto crimes of the future.

For the most part, yes. Crypto-related crime makes up less than one percent of crypto activity on the Blockchain, which is good news for those who either want to get into the crypto space or have worries, having recently become involved with the Blockchain. This makes it extremely unlikely, however, it is always good to be cautious before getting involved with a new crypto coin or project.

The short answer is no. While some exchanges are under some regulations in the UK, these do not have the same protection that traditional investment vehicles, such as an ISA might do. They certainly do not have the protection up to £85,000 that more traditional investments do. This may change in the future, however, for now, you invest at your own risk.

Recently, Chainalysis has been working with police forces to help trace these sorts of assets, so there is progress.

What can I do if I am a victim of crypto crime?

Keep a record of everything that you can. Report it to the exchange if one is involved and your bank too. Of course, also report it to the police. A big advantage is that the public ledger is exactly that – public, so with either the expertise that you may have or the assistance of others, you may be able to retrieve some of your lost crypto but this is far from guaranteed.