Our review of well-known exchange Kraken. How good is the security, what are the fees like, and how can you get rewards?

/5
Open Account
While the signup process itself is painless, verification can take a while.
/5
Interface
Powerful, with multiple features to support high-volume trading. Newcomers may find it overly complicated.
/5
Customer support
Has a reputation for being lackluster.
/5
Security
Considered one of the safest exchanges in operation.
/5
Fees
Comparatively low, though the multiple different fee schedules could trip some users up.
/5
Withdrawal
Fast and secure, through strict compliance with financial regulations can make it difficult to access your money immediately.

Kraken is everywhere – after 10 years in business spent acquiring other crypto businesses and extending its reach, you could say it has tentacles everywhere.

Currently, the largest Bitcoin exchange in terms of volume and liquidity, San-Francisco based exchange Kraken is a solid fit for experienced users that can take advantage of its high liquidity and advanced trading features. Newcomers will benefit from Kraken’s high security and 24/7 customer service as well, though they might be intimidated by the complex interface.

In terms of crypto exchanges, Kraken is a grizzled veteran. Founded in 2011 by Jesse Powell in response to the Mt. Gox hack, Kraken has become renowned for its comprehensive security and low fees. Kraken has achieved the significant milestone of being listed on the Bloomberg terminal, a tool relied on by the world’s major financial decision-makers. They also support 56+ popular tokens, which is handy for investors looking to broaden their portfolios while taking advantage of Kraken’s financial products and reputable security.

That financial coup paid off – to date, Kraken has raised $118.5 million, and is currently pushing for a $20 billion valuation. At the time of writing, the 24-hour trade volume on Kraken was $2.4 billion, approximately the same as the GDP of Bhutan.

Kraken has had its fair share of problems over the years. In 2018, Kraken experienced shutdowns lasting as long as 48 hours to address vulnerabilities, spiking unease among investors. However, Kraken’s powerful trading tools continue to appeal to high-powered crypto investors, particularly those based in the States.

According to company history, Kraken was founded in reaction to the legendary 2011 Mt. Gox hack as a secure alternative. True to company vision, Kraken has yet to report a major security breach. Kraken also has a history of being proactive; in response to the 2020 Ledger breach, Kraken alerted potentially affected users and offered advice.

In their security overview, Kraken outlines the measures they take to protect user funds and privacy, including a dedicated security team, air-gapped cold storage for the majority of deposits,  an ongoing bug bounty, robust information security protocols, PGP encrypted email, SSL site encryption, and real-time monitoring, among other things. Kraken also offers educational resources for users looking to secure their accounts. So, do these measures work? Since Kraken has never been hacked or reported any breaches, the answer is yes (for now).

What about two-factor authentication? Kraken offers plenty of options – users can choose from a physical security key (YubiKey) or an authenticator app. While users have their choice of authenticator apps, the company recommends Google Authenticator.

Kraken does adhere to KYC (know your customer) and AML (anti money laundering) legislation. The amount an account can trade is dependent on the level of verification provided. If you’re looking to withdraw cash or crypto, use their API, and trade on margins, prepare to have plenty of documentation ready.

1.Visit the Kraken site at https://www.kraken.com, click the “Create Account” button in the upper right hand corner. After you’ve provided a username and password, Kraken will send an activation email with an activation key.

2. Once you’ve entered the activation key, you have a Kraken account.

3. While you don’t need to provide documents immediately, Kraken does have verification level requirements. Kraken has four verification levels: Starter, Express, Intermediate, and Pro, though the Express is only available to US citizens. In order to access higher withdrawal limits, deposit and withdraw cash, stake off-chain, trade on margin with high limits, and trade on Kraken futures, users will need to qualify for an Intermediate account or higher.

4. To verify your account, click on your name in the upper right hand corner, and select “Get Verified”. 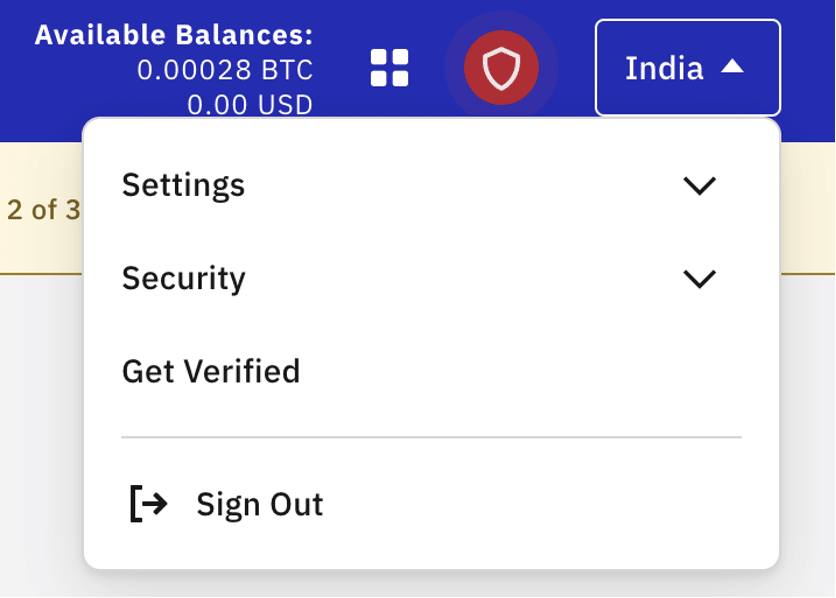 5. Choose the account type you want to apply for and press the “Verify” button. To learn more about the verification level requirements, check out the Kraken verification page here. 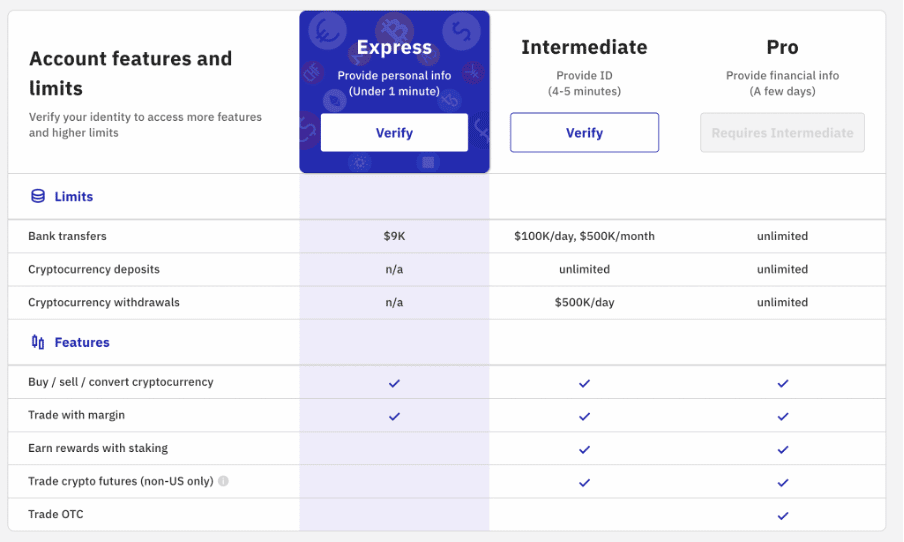 Kraken’s most powerful trading tools, like the dark pool, business accounts, and trading via the over-the-counter desk are only available to Pro accounts, who need to provide extensive documentation in addition to a KYC questionnaire to access premium services.

Once you’ve set up an account and gotten the appropriate level of verification, you can jump right into trading. Deposits and withdrawals can be made via SEPA, SWIFT, wire, domestic transfers, and in some cases credit or debit cards. If you’re in the EU and live in one of the SEPA countries, fiat deposits via SEPA are free.

Which countries can use Kraken?

Does Kraken have a wallet?

Kraken does not offer a wallet.

Kraken is widely considered one of the safest crypto exchanges.

What is the minimum deposit for Kraken?

The minimum deposit fee for Kraken varies based on the deposit method, but can be as low as $1 USD. You can find the deposit minimum for your planned transaction on the Kraken support page.

Visit the Kraken site at https://www.kraken.com, click the “Create Account” button in the upper right hand corner. After you’ve provided a username and password, Kraken will send an activation email with an activation key. Once you’ve entered the activation key, you have a Kraken account. From there, you’ll need to provide the necessary documentation to get to your desired verification level.