/5
Open Account
A breeze
/5
Interface
Clean, uncluttered, and easy to navigate, but not the best we’ve seen
/5
Customer support
Some iffy moments, but overall solid
/5
Security
Below industry standard, but no hacks
/5
Fees
No fees for CEX.IO Broker, average fees for CEX.IO proper
/5
Withdrawal
Easy, with plenty of deposit options

CEX.IO was founded in 2013 by entrepreneur Oleksandr Lutskevych. Initially, CEX.IO operated as a Bitcoin mining pool and cloud mining services platform. It owned the notorious GHash.io pool, which was the only mining pool in history to control over 50% of the Bitcoin network. Theoretically, they could have pulled off a 51% attack, which would have radically changed Bitcoin’s trajectory.

The exchange currently has 4 millions users, and offers a diverse array of financial services in addition to cryptocurrency trading. CEX.IO added card deposits in 2014, and have processed over USD $1 billion in payments since. Sure, this is chump change compared to big players like Coinbase, but it’s nothing to sneeze at either.

CEX.IO has repeatedly taken the path of most regulation. They attained their MSB (Money Service Business) license in 2015 from FinCEN, the US financial watchdog. They opened a US office in 2019, and have attained Money Transmitter Licenses (MTLs) in 31 US states.

As far as we know, CEX.IO has not been hacked (yet). Crypto exchanges are large and tempting targets for enterprising cybercriminals. A multimillion-dollar hack can be carried off with a little luck, a lot of skill, and a misstep on the behalf of the exchange. That’s why it’s always important to see what kind of security protocols a given exchange has in place.

CEX.IO gets points for being relatively transparent about its security measures. It loses more because many of those measures are inadequate compared to industry standards. For the sake of fairness, we’ll start with what CEX.IO does right.

First up: CEX.IO has comprehensive insurance for some users. All United States residents’ USD funds are covered by FDIC insurance, up to a maximum of $250,000 per person.

Unfortunately, there are no dogs.

Now we get to the not so good aspects of CEX.IO’s security. My major issue is that the security measures they list are either word salad, or the absolute bare minimum polished to a shine and presented as groundbreaking.

One of the big points of contention is CEX.IO’s self-proclaimed use of TLS 1.2 encryption of personal data, which is not the highest level of encryption. TLS 1.3 is currently industry standard. In an industry that lives and dies by encryption, this is a big misstep.

According to them, they “apply the top standard adopted by credit and debit card providers, PCI DSS Level 1, to our hot wallets and regularly audit the compliance elements associated with this process.” While PCI Level 1 is the highest achievable level, it only means that they get a third-party audit every year.

There have also been user complaints about 2FA resets taking over a week to go through.

Wondering how to open a CEX.IO account? It’s easy and straightforward. Keep reading for a step-by-step explanation of the onboarding process.

1. Visit the official CEX.IO site at https://cex.io/. Click on the ‘Get Started’ button in the center of the page. 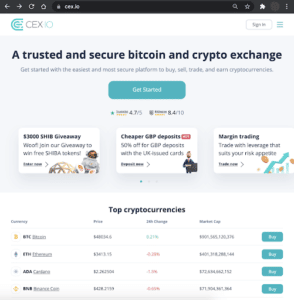 2. Choose whether you want to create an individual account or a business account by clicking one of the respective buttons. 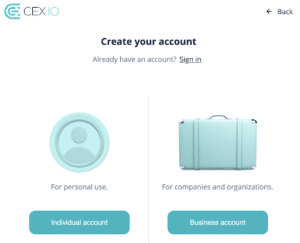 3. Enter your personal details, agree to the Terms of Use, and voila! You’ve made your CEX.IO account.

4. Unfortunately, unless you cough up some documentation your trading limit will be a whopping $0.00. CEX.IO has verification requirements in place for any amount of trading. You can update your verification by choosing a deposit method, or by navigating to the dropdown menu in the upper right hand corner and choosing “Verification.” 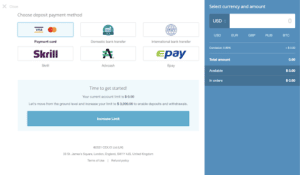 Choose “Increase Limit” to navigate to the Identity Verification page

The most basic verification allows users to deposit up to $3,000.000 USD and withdraw $10,000 USD. The highest level of verification is reserved for corporate accounts, and has no deposit or withdrawal limits. 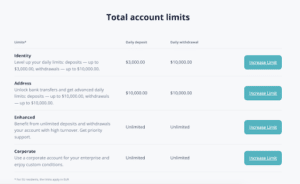 Does CEX.IO have a wallet?

CEX.IO does not currently offer a wallet, though there is one coming soon. Details can be found in the web browser. They do have a mobile app which is available on the App Store and Google Play.

What coins are available on CEX.IO

What is the minimum deposit for CEX.IO

CEX.IO has no minimum deposit.

Has CEX.IO been hacked?

At the time of writing, CEX.IO has not been hacked.

There is also a support center with articles on common problems written by members of staff.